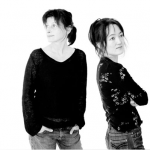 Makiko Hirabayashi and I met in Copenhagen, bringing each our cultural heritage as well as our common background in jazz and world music.

Makiko’s insightful piano playing, the sounds of the different flutes, among others the Chinese bamboo flute, the percussive African Fula from Senegal , the mysterious G flute, mixed with Bob Rockwell’s tenor saxophone and clarinet, gave the inspiration to compose new music for this acoustic quintet. The contrast between the deep acoustic bass and the light flutes, the poignant saxophone, mixed with the colors and timber of the piano and the drums are the recipe for dynamic and lively quintet music.

The inspiration also comes from our roots in France and the East, classical music and modern jazz.

Living in Denmark since 1983. One of the most in demand and popular jazz musician in Denmark.

In addition to have been touring with the Thad Jones/Mel Lewis Big band, Bob did also play in smaller groups, with among others Ben Sidran, Freddie Hubbard, Billy Hart, Tom Harrell, Al Foster, Kenny Drew, Alex Riel, Marilyn Mazur, Kenny Wheeler, Victor Lewis,Rufus Reid. He has a longstanding collaboration with the pianist Jan Kaspersen, and the bassist Jesper Lundgård. Bob Rockwell recorded 9 Cds in his name and participated on numerous Cds with among others the Danish Radio Big Band, Michael Mantler’s saxophone concerto with the Berlin Chamber Orchestra, Repertory Quartet, Organizers.

Living in Denmark since 1998. Mariane is playing with her Quintet All One, with the French acoustic virtuoso guitarist Olivier Cahours, touring in Denmark and in France. She recorded 2 Cds under her name, « All One » 2006, « A place for you » 2003, both for Stunt Records.

Living in Denmark since 1990. Diploma from Berklee College of Music Boston and from the Rytmisk Musik Konservatorium, Copenhagen. Own Trio with Marylin Mazur and Klaus Hovman, Cd release « Makiko », Enja 2006. Touring in Japan, South Africa, Brazil and Europe with numerous orchestras among others « Sisters », Morten Kargaard Group, « Morrild ». With Sisters, she won three awards for Europeen Jazz Contest in Belgium 2005.

Living in Denmark since 2001. Diploma from the Rytmisk Musik Konservatorium, Copenhagen 2005. Erik is playing a large range of styles, from classical to rock/pop, and jazz. He’s a member of the following bands: Karen Bach Trio, « Attaboy », Frederik Mellqvist Trio, « Babylove and the Van Dangos ».

Morten has established himself as one of Europe´s most demanded and exiting young jazz drummers.

He graduated from the danish Royal Academy of Music in 1997. Based in Copenhagen his joyful, creative and energetic playing can be heard on more than 60 recordings with many top scandinavian- and european names in jazz. Cæcilie Norby, Lars Danielsson, Lars Jansson, Chris Minh Doky, Ulf Wakenius, Jan Lundgren, Paolo Fresu, Stefano Bollani, Nguyen Le, Dhaffer Youssef are just among few of the artists with whom Morten has collaborated.

Current projects include a co-lead trio with long time partner Jesper Bodilsen (DK) on bass and Italian piano virtuoso Stefano Bollani, as well as being a member of trumpetstar Paolo Fresu´s « Devil Quartet » and « Kind of Porgy and Bess » ensemble.

The flutist Mariane Bitran is French, but lives in Denmark. The pianist, Makiko Hirabayashi is Japanese, but also lives in Denmark. In other words, two foreign women residing here, who together have taken upon themselves the role as co-leaders in this new quintet, which also consist of the American saxophonist, Bob Rockwell, the Danish drummer Morten Lund and the Swedish bassist Erik Olevik. Last Friday, one could experience them at their first appearance at Copenhagen Jazzhouse at a concert that was well attended. And those who had found the occasion to spend their Friday night in Jazzhouse, had something to come home with. Because, all together, the concert was an experience.

The major part of the quintets material was written by one or the other of the band leaders. And generally speaking, the material was characterized by the will to investigate the frontiers between standards and modern jazz, and between jazz, classical and world music. Most of the music was arranged and composed, sometimes the quintet improvised in a more reserved way which indicated respect and esteem towards the most central and atypical instrument- the flute. It was maybe precisely this obvious respect and esteem – also towards the musical visions of the band leaders  combined with the sum of artistic qualities of the five individual instrumentalists, which made that the concert as a whole, was marked by the will to innovate and a sense of collective playing. Nobody could be in doubt about Makiko Hirabayashis abilities on the piano or Morten Lunds gift as a drummer. But neither could anyone be in doubt that for instance, the interplay between Mariane Bitrans flute and Bob Rockwells saxophone was matching exceptionally well.

A promising debut of a Danish/international ensemble, with an unusual potential and an excellent material.